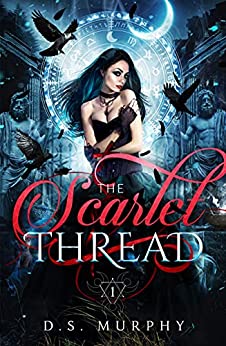 "Percy Jackson meets Mortal Kombat. This book seems quite close to the Percy Jackson series, if it had gore, death and totalitarian dictatorship." ★★★★★

"Love, betrayal, mythology, mystery, you name it this has it! Hold onto your horses and Minotaurs people as this ride is definitely going to get bumpy." ★★★★★

"Weaves Greek mythology into real life in a way that makes it excruciatingly hard to stop reading. This is not your G-rated fantasy. It's harsh, twisted and real." ★★★★★

My name is Kaidance Monroe, and sometimes when I touch people, I see how they die.

After I saw my little brother's death but failed to stop it, my parents abandoned me to a juvenile detention facility. I don't let people touch me anymore. Not my fingertips, not my skin, not my heart.

Just before I turned 18, I got a visit from a cute guy, who tricked me into giving up my secrets. He said I was special, but he wasn't the only one searching for me. I barely escaped with my life. Now I'm in a mansion, learning how to control my abilities - abilities so powerful, even the gods are jealous. I didn't mean to make anyone fall for me. Certainly not my would-be killer. And I never imagined how far he would fall.

"A dark Gothic Greek mythology urban Fantasy with a highly original and very well-written plot. There are several unexpected twists and turns here and a real shocker at the end." ★★★★★

The Scarlet Thread is a dark fantasy romance for fans of Greek mythology and Gothic romance. Fans of Fallen and Percy Jackson will be captivated by this mashup of fallen angels and forgotten gods.

This book is for anybody who loves Greek mythology and the gods and goddesses of Olympus, young adult dark fantasy, epic stories full of history and mythology, magical powers and supernatural creatures, and tragic romances and Gothic themes

This is BOOK ONE in the Fated Destruction series.