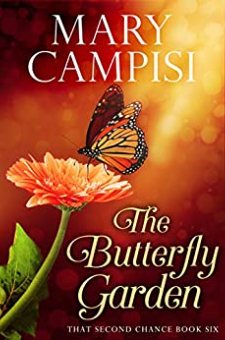 Sometimes we’re lucky enough to get that second chance – in life and in love. That Second Chance Series are stand-alone stories of strong women who battle heartache and loss with a courage and determination to find new paths and true love. What ties them together? A common theme: belief in the beauty of that second chance.The Butterfly Garden is Book Six of That Second Chance Series.Sometimes love happens when you least expect it…Jenny Romano has never been a white-picket-fence, happily-ever-after girl. Despite a mother who rejected her free-spirited, unique ways as irresponsible and just plain wrong, Jenny has found happiness as a photographer, flitting around the country and snapping photos of other people’s lives. Her older sister, Grace, has a husband, children, and a carpool schedule. She’s the one their mother calls “perfect.” But when tragedy strikes her sister’s carefully constructed life, Jenny must step in and help. Soon, she’s knee-deep in small-town, suburban life, the kind she’s always avoided…Psychologist Elliot Drake spends so much time healing other people’s pain that he prefers to keep his own relationships short and uncomplicated. He’s loved and lost once and with a young daughter to raise, he’s not willing to risk his heart again. Of course, he’s never met anyone quite like Jenny. Outrageous and unpredictable, she’s nothing like her well-controlled older sister. And the more he’s around Jenny, the more he wonders if short-term is really what he wants…Elliot and Jenny are about to discover that real life happens whether you want it to or not. Will they let real love happen, too?That Second Chance Series:Book One: Pulling Home (Also prequel to A Family Affair: The Promise)Book Two: The Way They Were (Also prequel to A Family Affair: The Secret)Book Three: Simple Riches (Also prequel to A Family Affair: Winter)Book Four: Paradise FoundBook Five: Not Your Everyday HousewifeBook Six: The Butterfly GardenBonus material: Excerpt from Pieces of You, Book One of The Betrayed Trilogy...Sometimes hiding in the shadows is the only way to protect your heart.