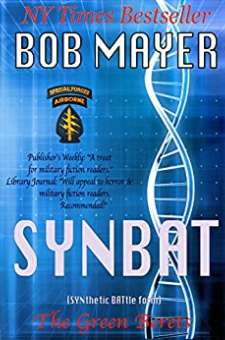 Library Journal: “This book will appeal to a variety of horror and military fiction readers. Recommended.”Dave Riley and his Green Beret A-Team must defeat a threat shockingly inhuman. Set in the shadowy world of genetic research, Synbat, stands for Synthetic Battle form.The research is conducted at a lab in the deep woods of western Tennessee, under the Pentagon's secret Black Budget, is Top Secret. Until the subjects of the experiment escape. The Synbats are now roaming the countryside, acting out what they were designed to do: kill.Riley and his team are called in for 'damage control.' Easier said than done. They follow the deadly trail to Chicago, where long abandoned tunnels are a lair for the Synbats to complete what could well spell the end of mankind: procreate at incredible speed. It's a race against time as Riley must destroy mankind's greatest threat-- our own genes spliced with that of another species.Kirkus Reviews. “Action packed entertainment. An atavistic milieu plausibly conjured up by Mayer.” Publishers Weekly. “Mayer keeps story and characters firmly under control. The venal motives of the scientists and military bureaucracy are tellingly contrasted with the idealism of the soldiers—a treat for military fiction readers.”