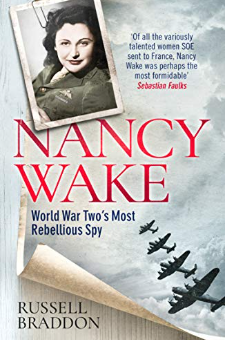 ‘Of all the variously talented women SOE sent to France, Nancy Wake was perhaps the most formidable’ —Sebastian FaulksThis is the incredible true story of the greatest spy you’ve never heard of—as told to the author by the woman herself.At the outbreak of World War Two, Nancy Wake’s glamorous life in the South of France seemed far removed from the fighting. But when her husband was called up for military service, Nancy felt she had just as much of a duty to fight for freedom. By 1943, her fearless undercover work even in the face of personal tragedy had earned her a place on the Gestapo’s ‘most wanted’ list.Mixing armed combat with a taste for high living, Nancy frustrated the Nazis at every turn—whether she was smuggling food and messages as part of the underground Resistance or being parachuted into the heart of the war to lead a 7,000-strong band of Resistance fighters.The extraordinary courage of this unequalled woman changed the course of the war, and Russell Braddon’s vividly realised biography brings her incredible story to life.Revised edition: This edition of Nancy Wake includes editorial revisions.