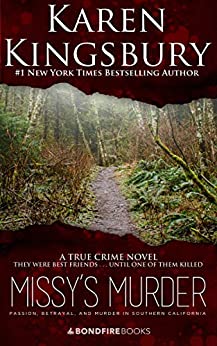 On a beautiful October day in the San Fernando Valley, teenager Missy Avila was lured into the woods, beaten, tortured, and drowned. Missy’s best friend, Karen Severson, publicly vowed to find the killer and even moved in with Missy’s family to help. Three years later, a surprise witness exposed the murderers as Missy’s two best friends—one of whom was Karen.

New York Times–bestselling author Karen Kingsbury delivers a story full of twists, turns, betrayals, and confessions. Missy’s Murder is a shocking tale of one of the most notorious murder trials of the eighties, and a startling debut novel from Kingsbury, who now has over twenty-five million books in print.