Heir to the Sundered Crown 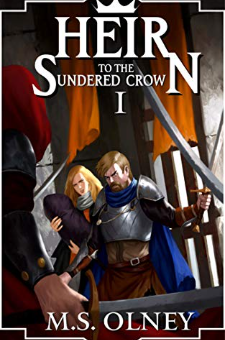 A realm torn asunder by civil war will give rise to a hero. The Kingdom of Delfinnia is in chaos. After Assassins kill the king and his family, the barons now battle one another for the crown. Unknown to them, one heir yet lives.As the civil war worsens, dark things begin to stir in the vast Eclin mountains. Horrors long thought destroyed have returned and led by an ancient evil begin to march upon the war-torn kingdom. Meanwhile, in the mage city of Calradia and as all hope seems lost, a young man named Luxon will discover his powers. The first wizard for a century, he is the man who will one day be known as the Legendary and the hero will give the realm its greatest king.Sent on a quest to find the hidden heir, Luxon teams up with the legendary monster slayer, Ferran of BlackMoor, the deadly yet beautiful Witch Hunter Sophia Cunning and the noble Knight of Niveren, Kaiden of the Marble shore.Together they travel the realm battling deadly monsters, assassins, and the most feared enemies of them all, the servants of the dark lord Danon himself, the evil N’Gist cult. The Heir to the Sundered Crown is a heroic fantasy tale filled with action, battles and magic that will ignite the imagination and set the stage for an epic confrontation between the light and the darkness. -Copyright © Matthew Olney