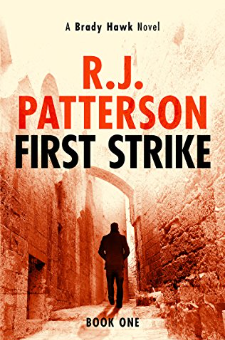 When former Navy SEAL Brady Hawk watches his fiancee dragged off and murdered, he decides he's had enough. Enough talking. Enough diplomacy. Enough fear. It's time for action. And terrorists have nowhere to hide.Amid the ashes of another terrorist attack on U.S. interests, Hawk goes on the hunt for the world’s deadliest bomb maker. But as Hawk’s search intensifies, he discovers a secret about his own past that shakes him to the core and raises questions about the true purpose of his mission.As lies begin to unravel, Hawk must remain focused to thwart another attack before it’s too late … both for himself and the world.If you're a fan of authors like Brad Thor, Vince Flynn, Brad Taylor or Lee Child you will be sure to enjoy this series from award-winning and bestselling author R.J. Patterson.What other readers are saying:????? "Reminiscent of the original Bourne books by Robert Ludlum, but with a sprinkling of the relationship of David Baldacci's King and Maxwell.”????? “R.J. Patterson is up there with Baldacci.”????? “First Strike delivers excitement, intrigue and action from the first page to the last.”????? “This story was imaginative, but certainly came across as realistic.”????? “This is a first rate action thriller!”????? “If you are looking for some adrenalin packed action, don’t think twice, just grab a copy and start reading, you won’t be sorry.”????? “A well crafted page turner.”????? “Brady hawk is the next Jack Reacher!”????? “Another great book by R.J. Patterson! I liked that way he makes his characters so real.”????? “This book is in the vein of Brad Thor and Vince Flynn with a bit of Ian Flemming.”????? “R.J. Patterson's short chapters and fast moving plot render this novel impossible to put down.”