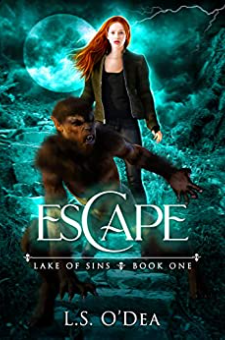 The howls of Guards on hunt shatter the air.Trinity can't let them catch her outside of the encampment or she and her family will be executed.She has to hide but where? She's surrounded by river and forest.A splash draws her gaze and the river-man's flipper slips under the water. Forest it is, because there's no way she's going into the river.She races into the woods, backpack slamming against her shoulders as the calls of the Guards draw closer. Brush breaks and crashes behind her. They're too close. There's nothing for her to do but surrender.She raises her hands to her shoulders and slowly turns, but it's not the Guards who have caught her. A Tracker, the deadliest of predators, stands on its back two legs, towering above her, front legs hanging down like arms. Brindle fur covers its body and its eyes glow yellow in the shadowed forest. Its tongue lolls out the side of its mouth, exposing a row of sharp teeth on the other side.She should scream but all she can do is think, "Someone should tell it that they no longer exist in the wild."Lake of Sins: Escape is a young adult fantasy in the vein of The Island of Dr. Moreau. If you like imaginative dystopian worlds, headstrong heroines, and incredible monsters, then you'll love L.S. ODea's visionary tale. Get your copy of Lake of Sins: Escape and enter a bold, monstrous vision today! Interview with the AuthorQ. - So, why should someone read the Lake of Sins series?Well, because it's great (smiles) and you can get the ebook for FREE. However, if you're looking for your typical dystopian, post-apocalyptic, survival thriller then you should look somewhere else. This story has been described as a one of a kind world created in a unique dystopian society.The characters in the series are human-animal hybrids--genetic mutations or evil experiments, is yet to be revealed. It's an entire new species of characters who don't fit in the typical genre categories of vampire, werewolf, witch, fairies or even angels and demons.The world of the Lake of Sins is segregated by class with the humans ruling supreme. In book one, Escape, Trinity, a sixteen year old Producer (the lowest of the classes), unwittingly sets off a collision between the classes when she flees into the forest to discover the fate of the teenagers who are removed from camp every year after harvest. Some say they are taken to another camp to keep bloodlines strong. Others say they are tortured. No one knows and Trinity is determined to find out, but what she doesn't expect is to be hunted by mutant creatures and predators long thought to be extinct.The books are fast paced with adventure and mutated creatures around every corner. There are legends that are truth and societal truths that are well guarded lies.All-in-all, it's a unique and exciting read and you should give it a try. I think you'll love it.The Conguise Chronicles series also takes place in the world of the Lake of Sins. These stories are prequels, explaining how some of the characters, who you meet in the Lake of Sins series, became monsters.Q. - Who should read the Lake of Sins series?Although there's a strong, female lead in Lake of Sins, the audience for both series is broad. I have fans (male and female) aged ten through eighty. Anyone who likes gory thrillers that are dark, a little disturbing and packed with action will enjoy these books. If you like Hunger Games, Lord of the Rings and The Island of Dr. Moreau, then you'll enjoy these tales.However, a word of caution is in order. These books are not for the squeamish. Some scenes are bloody and violent almost falling into the horror genre, but the interactions between the characters are funny, poignant and loving (and a love triangle develops as the stories progress). Still, I wouldn't recommend these books to anyone under thirteen without the parents reading the books first.