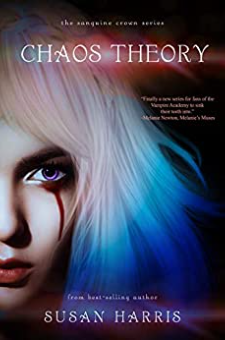 Chaos Theory brings vampires back in popular form. This new series pays homage to the classics, while breathing fresh and revitalized life back into the genre. “A satisfactory vampire tale with a gruesome cliffhanger ending that will leave them thirsting for more..."” —Kirkus ReviewsEverything you thought you knew about vampires is wrong…The vampire race is on the brink of extinction, and their fate now rests on the shoulders of an unlikely pair. Ryan Callan might be a badass seventeen-year-old with a mouth as sharp as her sai, but surviving the loss of her parents has come at the cost of isolating herself from everyone—even her best friend, Crown Prince Nickolai.When Nickolai is sent to integrate with the humans, Ryan is tasked with watching over him and ensuring his safety. But when a rogue vampire threatens to reveal the existence of vampires to the world, Ryan and Nickolai must put aside their differences to keep their world a secret. Now, thousands of human lives are at stake… and so is the entirety of vampire kind.Perfect for fans of Vampire Academy by Richelle Meade, Midnight Sun by Stephenie Meyer, and Slayer by Kiersten White, Susan Harris’s young adult vampire romance is here to prove that vampires are back, and they’re more enticing than ever. “Finally, a new series for fans of Vampire Academy to sink their teeth into.” —Melanie’s MusesFuture release dates for The Sanguine Crown Series by Susan Harris:Chaos Theory (May 20, 2020) Butterfly Effect (September 20, 2020) Wicked Game (2021) Burn Notice (2021) Fight Song (2022) Can’t get enough vampires, werewolves, and paranormal romance? Then here’s what to read next! The Ever Chace Chronicles by Susan Harris:If you loved Chaos Theory, you’ll love The Ever Chace Chronicles by Susan Harris! This paranormal mystery romance series is six novels deep and ready to binge read today. Nominated for a RONE Paranormal Romance Award and having sold more than 15,000 copies, this is definitely the perfect series to take a bite out of next! When a series of grisly murders points to a supernatural serial killer, the Paranormal Investigations Team calls on Dr. Ever Chace to help them solve the case. Can she untangle the mystery, stay alive, and resist the added danger of her disarmingly attractive partner? Read all of the books in The Ever Chace Chronicles by Susan Harris:Skin and BonesCollateral DamageSmoke and MirrorsNight of the HunterNever Back Down Shortcut To The Grave Hate waiting for a sequel to release? This young adult retelling by Susan Harris is complete and waiting for a reader like you to devour it! The Defy the Stars Trilogy by Susan Harris:Shakespeare’s classic Romeo & Juliet is reimagined in this compelling drama about two young people drawn by fate into an unwinnable situation. If you think you know how this story ends—think again!Read all of the books in the Defy the Stars Trilogy by Susan Harris: A Tale of Two Houses Until Death Do Us Part In Defiance of the Stars