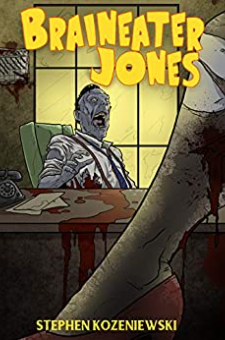 No memory. No pulse. No clue.The undead private eye everybody calls “Braineater Jones” has an axe to grind. Somebody plugged him and dumped his corpse in a swimming pool. Worse yet, his memory’s gone. He has no idea who killed him or why.But he’s damn sure going to find out.With a smartass severed head as a partner, Jones hangs up his shingle in the city’s undead quarter. When he’s not solving cases (poorly) Jones is always looking to keep his flask full. Prohibition is in full swing, and the dead need alcohol to function. Without liquor they become mindless, flesh-munching ghouls. (In a word: braineaters.)Everything will probably be fine. The investigation into his own murder probably won’t point Jones toward the city’s most important bootlegger. And even if it does, it’s not like he’ll risk cutting off the hooch just to seek justice for himself, right? No one man’s life is worth unleashing a cannibalistic orgy of violence. Right?Cracking this case will be a tall order, but one thing’s for sure: whatever happens, Braineater Jones isn’t getting out of this one alive…