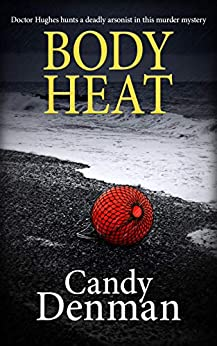 Medical crime fiction by Candy Denman, Britain’s answer to Patricia CornwellWhen police doctor Callie Hughes is called to a crime scene, pronouncing death isn’t difficult. More difficult will be determining the age and sex of the victim. The charred body found inside a burned-out car is so badly damaged, it will be a challenge for forensics to identify.The question facing the police will be whether this was an unfortunate accident or foul play. From an initial examination of the scene, Dr Hughes has formed her own conclusions. The car was parked in such a way as to make exit difficult, and the position of the body indicated the victim struggled to escape.As further evidence emerges, the investigating detectives agree with her hunch that it is murder. And when another death occurs in similar circumstances, she becomes convinced they are dealing with a serial killer.Certain characteristics of the crime bear the hallmarks of a known arsonist. Yet Hughes becomes further embroiled in the case when she is asked to act as a responsible adult for the suspect, a juvenile with a history of mental illness.But when the heavy-handed tactics of the police begin to grate with her, she decides to do some investigating of her own. Will her curiosity get the better of her and put her at risk from the very person she hopes to protect?BODY HEAT is the second murder mystery to feature Dr Callie Hughes. It can be enjoyed entirely as a standalone but readers may also enjoy the first and third books, DEAD PRETTY and GUILTY party. It will appeal to fans of forensic crime fiction like Kendra Elliot’s Bone Secrets series, and anyone who likes a good mystery to solve.