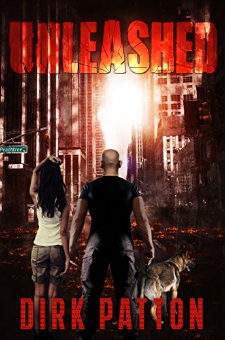 John Chase has just arrived in Atlanta on a routine business trip. When he wakes the next morning, John is shocked to learn that America has been savagely attacked with both nuclear and biochemical weapons. He is immediately thrown into an apocalyptic horror, rescuing a young woman from a group of survivors who are in a violent rage as a result of the release of a devastating neurotoxin.His path is clear. Survive and fight his way across the continent to reunite with his wife as society disintegrates into savagery and millions of people become raging infected, roaming unchecked in their pursuit of the rapidly dwindling number of survivors. But survival will be the hardest task he has ever undertaken.So begins Unleashed, the first installment in the thrilling V Plague series. The novels are set against the backdrop of a shattered, post-apocalyptic America and tell the stories of a steadily growing cast of complex characters and their battles to survive. There are numerous sub-plots of greed, brutality, betrayal, treason, heartbreak and even a serial killer woven throughout the progression of the main storyline, chronicling the best and the worst of humanity as the world crumbles. With a main character that is the Jack Reacher of the apocalypse, this is a series that has been hailed by readers and critics alike:“A richly textured post-apocalyptic world has been created that draws you in, grabs you by the throat and shakes you like a rag doll. Wow! I’ve read so many series that peak by the second or third book, giving up on them when the author starts recycling events and storylines. Not here! I’ve read all the books and am impatiently waiting for the next, and it just keeps getting better! New characters, new subplots, new dangers, new victories, new settings. Each book is fresh, continuing the best story I’ve read in years. I hope the series never ends!”“I wasn’t, and I’m still not a zombie fan, but this series blew me away! You want zombies, you’ve got the infected. But these are all too real and possible. No mumbo-jumbo ridiculous explanation (or lack thereof) for re-animated corpses walking around to be found here. Bravo, Mr. Patton! You scare the hell out of me and keep me flipping through the pages because I can’t put your books down.”“A devastating, completely believable end of the world as we know it scenario? Check!The guilty pleasure of the apocalypse?Check!Well written, intricately plotted with a surprise at every turn?Check!Enough action to make Chuck Norris and Rambo beg for a vacation?Check!”“A giant breath of fresh air in a tired genre”“What The Walking Dead should be. Cancel TWD and start filming this tomorrow!”“Wonderful characters that are real. Some you love, some you hate and some you loathe”"Two tours in Iraq and one in A-stan and I've met a lot of operators. This is the most realistic, true to life depiction of a bad-ass special forces operator I've ever read. They aren't supermen or ninjas, they're human just like everyone else, only much more determined. Best books and best characters I've come across in years. Oorah!"“An all too believable scenario for the end of the world”“A beautifully written, tightly woven tale of determination to survive against all odds”“Perfectly crafted action scenes, creeping gooseflesh suspense and sudden, laugh out loud one-liners to keep you turning pages”“Look up adrenaline in the dictionary and most likely you’ll see a picture of one of these books”“Absolute genius! What a brilliantly done series. Read all the books in a week. Who needs to go to work?”