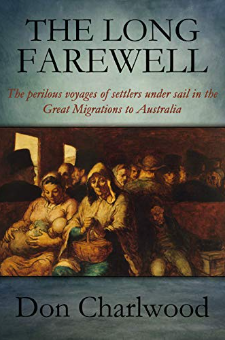 During the nineteenth century more than a million people, many of whom had never ventured beyond their homes in Britain, sailed to the new colonies of Australia. On their months-long voyage the emigrants lived in a state of limbo — isolated, belonging neither to the old world nor to the new, and living in fear of icebergs, fever and storms.Drawing upon a wealth of diaries and contemporary records, Don Charlwood evokes their experiences: the physical dangers, stress, boredom and personalities of travellers on their way to a new life.

Praise for The Long Farewell:

‘An excellent and highly readable book about the experiences of free immigrants on the long voyage.’

‘Charlwood’s book . . . positively drips with atmosphere; bringing us face to face with the attitudes and conditions of the time.’

‘Don Charlwood has sifted through records, letters, copious illustrations and more than 100 immigrants’ shipboard diaries to bring that experience to vivid, salty and fascinating life.’

was an Australian author. He worked as a farm hand, an air traffic controller, and most notably as an RAAF navigator in Bomber Command during WWII. He was made a Member of the Order of Australia in 1992 in recognition of service to literature.