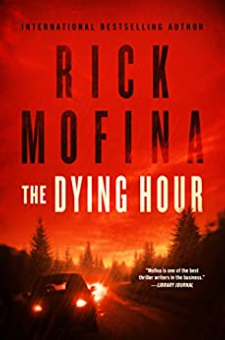 The Dying Hour introduces Jason Wade, a rookie crime reporter with The Seattle Mirror, a loner who grew up in the shadow of a brewery in one of the city's blue-collar neighborhoods. At The Seattle Mirror, he is competing for the single full-time job being offered through the paper's intense intern program. But unlike the program's other young reporters, who attended big name schools and worked at other big metro dailies, Wade put himself through community college, and lacked the same experience. Wade struggles with his haunting past as he pursues the story of Karen Harding, a college student whose car was found abandoned on a lonely stretch of highway in the Pacific Northwest. How could this beloved young woman with the altruistic nature simply vanish? Wade battles mounting odds and cut-throat competition to unearth the truth behind Karen Harding's disturbing case. Her disappearance is a story he cannot give up, never realizing the toll it could exact from him. The Dying Hour is a bone-chilling, mesmerizing page-turner that introduces readers to an all-too-human young hero who journeys into the darkest regions of the human heart to confront a nightmare. The International Thriller Writers (ITW), selected The Dying Hour as a finalist for a Thriller Award for Best Paperback Original, 2006.Rick Mofina is a former journalist who has interviewed murderers on death row, flown over L.A. with the LAPD and patrolled with the Royal Canadian Mounted Police near the Arctic. He's also reported from the Caribbean, Africa and Kuwait's border with Iraq. His books have been published in nearly 30 countries, including an illegal translation produced in Iran. His work has been praised by James Patterson, Dean Koontz, Michael Connelly, Lee Child, Tess Gerritsen, Jeffery Deaver, Sandra Brown, James Rollins, Brad Thor, Nick Stone, David Morrell, Allison Brennan, Heather Graham, Linwood Barclay, Peter Robinson, Håkan Nesser and Kay Hooper.The Crime Writers of Canada, The International Thriller Writers and The Private Eye Writers of America have listed his titles among the best in crime fiction. As a two-time winner of Canada's Arthur Ellis Award, a three-time Thriller Award finalist and a two-time Shamus Award finalist, the Library Journal calls him, “One of the best thriller writers in the business."