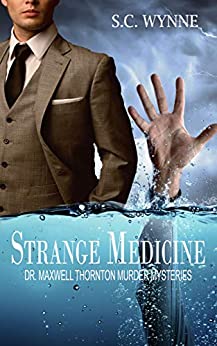 Dr. Thornton isn't a murderer. He's just a grump with a body in his pool.
Maxwell Thornton isn’t really a people person, but that never mattered to him because he’d lived for his career. After losing a patient during an operation, he’s shaken and afraid to pick up the scalpel again. He resigns his position in the city and takes a job as sole GP in the isolated town of Rainy Dale, Texas, population 1001.
Rainy Dale is populated with eccentrics who test his patience and seem to think he’s not only there to treat their illnesses, but that he’s also there to hold their hand and be their therapist. When one of his most annoying patients ends up dead and floating in Maxwell’s pool, he has some explaining to do to the local sheriff.
Sheriff Royce Callum is intelligent, determined and more attracted to the new doctor than he would like. He can’t imagine Maxwell is a murderer, but he also can’t exactly ignore a corpse in the sexy doctor’s pool.