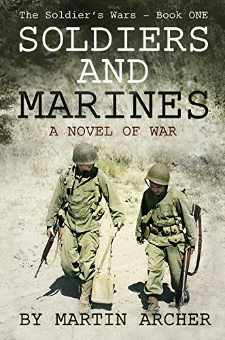 This is a very good read. It is the first novel in an action-packed multi-book military saga that follows the life of a combat soldier from his early years in the Korean War to his middle age in Vietnam, Afghanistan, Iraq, and elsewhere in Israel and the middle east in wars that are in the immediate future. It is fast paced and action-oriented as casualties and a willingness to sign up for additional front line tours and new wars result in Roberts shouldering responsibilities far beyond his years. Fans of WEB Griffin, Larry Bond, Tom Clancy, and Harold Coyle will enjoy this great addition to military fiction.Peace and Conflict is the second book in "The Soldiers and Marines" series. It follows Chris Roberts as he serves a peacetime hitch in Europe broken by several assignments to Vietnam - first with the fabled Second Parachute Regiment of the Foreign Legion as it goes down at Dien Bien Phu and then as an observer of the military's effort to defeat the Viet Cong.The third novel "War Breaks Out" describes the role and decisions of Roberts and his men when the Marines, reserves, and National Guard troops rush to Europe to reinforce NATO and participate in the intense war of air and armor that might have occurred if Russia's paranoid leaders had decided to invade Germany and fight NATO instead of giving up power and freeing their satellite nations. The fourth and fifth novels of the saga are set in the near future and describe the decisions and intense combat that may be about to happen: "War in the East" describes what happens when the US sides with Russia when China invades Russia to retake its traditional lands in the Russian east. The fifth, "The Israel's Next War," describes the intense combat and agonizing decisions that occur when the rise of militant Islam and the threat of nuclear war results in a coalition of Islamic Countries launching a surprise attack on Israel that permanently changes the boundaries and nations of the Middle East. The first three books of the saga are also available in a collection entitled "The Soldiers and Marines Trilogy."Martin Archer is also the author of a great multi-book saga about a company of English archers during and after King Richard crusade. Inevitably outnumbered, they use training and modern weapons such as the longbow and bladed pikes to win battles and riches, and in the process become the forerunners of what will one day become one of the world's great fighting forces - the English-speaking soldiers and Marines who are trained to fight both on land and on sea. All of Martin's books are available as digital books on Amazon and many are in print. You can find them by searching Amazon, Google, Goodreads, or Bing for "Martin Archer military."