Maybe You Will Survive 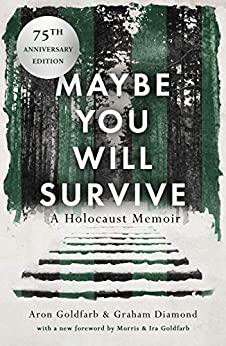 The remarkable autobiography of a Holocaust escapee
“Go on, my son. Maybe you will survive…”
Aron Goldfarb was fifteen years old when he was ripped from his bed in Poland and forced to enter a Jewish work camp. Watching helplessly as Nazis murdered his friends and family, he and his brother, Abe, made their courageous escape after hearing rumours of fellow prisoners being executed in gas chambers. With astonishing bravery and an unshakeable will to survive, the brothers hid together in underground holes on an estate controlled by the Gestapo. In this moving testament to the strength of human endurance and the power of relationships, co-written with acclaimed author Graham Diamond, Goldfarb tells his unbelievable true tale at long last.
Vivid, compelling and frequently harrowing, Maybe You Will Survive is essential reading for anyone with an interest in the human condition.
Marking seventy-five years since the end of the Holocaust and Aron’s liberation, this edition includes a foreword his from sons, Morris & Ira.
Aron Goldfarb (1924-2012) was a Polish businessman and survivor of the Holocaust. Overcoming unbelievable odds, he escaped a Nazi camp before starting a multimillion-dollar fashion design company, G-III Apparel. He is survived by his wife, Ester, two sons and five grandchildren.
Graham Diamond is a British-American writer. Previously employed as an editorial artist by the New York Times, his books include The Haven, The Thief of Kalimar and Forest Wars.