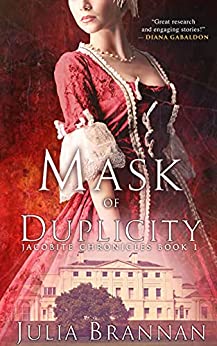 Following the death of their father, Beth’s brother Richard returns from the army to claim his share of the family estate. However, Beth’s hopes of a quiet life are dashed when Richard, dissatisfied with his meagre inheritance and desperate for promotion, decides to force her into a marriage for his military gain. And he will stop at nothing to get his way.
Beth is coerced into a reconciliation with her noble cousins in order to marry well and escape her brutal brother. She is then thrown into the glittering social whirl of Georgian high society and struggles to conform. The effeminate but witty socialite Sir Anthony Peters offers to ease her passage into society and she is soon besieged by suitors eager to get their hands on her considerable dowry. Beth, however, wants love and passion for herself, and to break free from the artificial life she is growing to hate. She finds herself plunged into a world where nothing is as it seems and everyone hides behind a mask. Can she trust the people professing to care for her?
The first in the series about the fascinating lives of beautiful Beth Cunningham, her family and friends during the tempestuous days leading up to the Jacobite Rebellion of 1745, which attempted to overthrow the Hanoverian King George II and restore the Stuarts to the British throne.
Join the rebellion of one woman and her fight for survival in...
The Jacobite Chronicles.