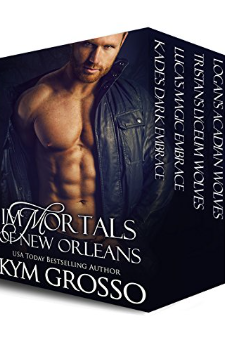 Bestselling & award-winning erotic paranormal romance. Full length vampire & shifter romance novels, each with their own happily ever after. KADE'S DARK EMBRACE (Book 1)After a series of girls are ritualistically murdered on the cold streets of Philadelphia, seasoned detective, Sydney Willows, is forced to work with sexy, alpha vampire, Kade Issacson. As he attempts to protect her from a murderer, Kade grows concerned that the beautiful, but very human detective, could easily end up dead should she tangle with supernatural forces that are beyond her control.The investigation leads them into a dark and dangerous world, deep in the heart of New Orleans, where together, they search for the perpetrators of the Voodoo killings. Sydney soon becomes the target of the killer and ends up fighting for her life and love in the Big Easy. Will she eventually give into the intoxicating desire she feels for Kade if she makes it out alive?LUCA'S MAGIC EMBRACE (Book 2) Sexy vampire, Luca Macquarie doesn’t do love; especially not with humans. Yet, ever since he rescued Samantha Irving, he can’t deny the enigmatic attraction he’s developed for the alluring mortal woman. In the Big Easy, they embark on a spellbinding journey, searching for a mystical amulet that promises to release her obligation from an ancient, lethal vampire who’s been threatening her life. With cryptic clues and clandestine allies, will Luca and Samantha destroy the dangerous amulet before others acquire it, setting forth a chain of catastrophic consequences? And will Luca give into his erotic desire for the witch who magically captures heart?TRISTAN'S LYCEUM WOLVES (Book 3) *RONE Award Winner 2014*Charismatic and powerful Lyceum Wolves’ Alpha, Tristan Livingston, is out for revenge after a devastating attack on his pack. Determined to mete out justice, he rescues a beautiful witness who may be the key to helping him find the perpetrators.Dr. Kalli Williams, dedicated veterinarian, is hiding a secret that endangers not only her own life but the lives of wolves across the country. She’s reluctantly agrees to help the sexy Alpha in his quest to identify suspects; ones who’d kill her on the spot if they knew she existed. As Kalli places herself in the hands of the dominant wolf, she soon finds she wants nothing more than to submit.Tristan, committed to ruling his pack as a lone wolf, is drawn to the mysterious and enticing woman, who seems more than human, but not quite supernatural. After living a lifetime alone, will he succumb to the visceral need to claim her? And will he prevail against the menacing enemy who threatens to destroy Lyceum Wolves?LOGAN'S ACADIAN WOLVES (Book 4) *IRC Nominated Best Book of 2014 for Paranormal & Erotic Romance* Deep in the heart of New Orleans, Acadian Wolves’ Alpha, Logan Reynaud, rescues a beautiful woman in the dead of night. Intrigued by the mysterious human, the commanding Alpha is determined to elicit all of her secrets, including her deepest fantasies. Driven by responsibility and honor, Logan must protect both his pack and the woman who’s captivated his attention.Dr. Wynter Ryan, a leading virologist, is fascinated with her charismatic protector. As the chemistry ignites between her and the dominant Alpha, she relinquishes her ties to the past, embracing ecstasy and submission within his arms and intrepidly acquiescing to her own adventurous instincts. Passion and mystery on the bayou stirs Logan’s wolf, yet Wynter’s a distraction he can’t afford when his priority is to lead his new pack. Will Logan surrender to the uncontrollable need to claim Wynter as his mate? And will he be able to keep her alive, finding the killer who threatens the Acadian Wolves?*The books in this box set contain several erotic love scenes and are intended for adult readers only.