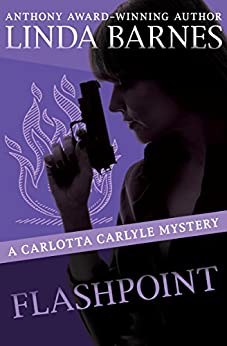 The Boston PI tries not to get scorched when an arsonist targets her. “I’m crazy about Carlotta! More! More! More!” (Sue Grafton).

Carlotta Carlyle knows all about urban survival. That’s why she’s happy to do her neighbor, Valentine, a favor like this one. The elderly recluse needs help burglar-proofing her rent-controlled apartment. But it seems Valentine’s fears are more immediate and threatening than she’s letting on. Because just twenty-four hours later, the old woman turns up dead in her ransacked home.

Finding out who’d want to kill a nice old lady lands Carlotta on the heels of a hotshot music executive claiming to be Valentine’s last living relative, a real-estate mogul with a knack for eviction, and Valentine’s terrified healthcare worker. But when Carlotta becomes the target of an arsonist, she knows she’s on to something hot: a city-wide conspiracy that Beantown’s top brass want dead and buried—along with the woman who knew too much.