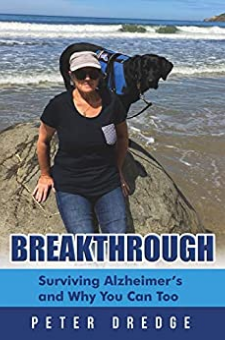 Ann Dredge was a fit, active woman. A keen cyclist and sportswoman. But after being diagnosed with Alzheimer's disease, she became unable to walk or talk and was expected to die within six months Incredibly, three years later, she's alert and responding to her carers! This book is a roadmap for those whose loved ones demonstrate early symptoms of Alzheimer's and shows that, with determination and dedication, it may be possible to arrest their decline and even recover lost function. It's an inspiring story, offering hope to sufferers and carers alike. Alzheimer's is fast becoming the biggest medical, social and financial challenge of this century. "Today around 50 million people in the world display Alzheimer's symptoms, a figure expected to increase to 150 million globally by 2050. To put it in another perspective, by 2050 nearly half of people over age 85 will display Alzheimer's symptoms." This means that soon, if it hasn't happened already, someone you love will be diagnosed with Alzheimer's. What will you do? That's the question Peter Dredge faced when his wife, Ann, was diagnosed in 2012. For a start, he threw himself into learning more about Alzheimer's. He learned it's not so much a disease as a range of symptoms with many possible causes. Current research has identified over 40 possible contributing factors including lifestyle, genetics and environmental exposure. And yet Peter found most medical practitioners believe Alzheimer's sufferers are doomed to an inevitable, terminal outcome. Their "treatment" recommendation is sedation and palliative care. However, Peter discovered research teams who are achieving high levels of success treating people with early stage Alzheimer's symptoms. 'Breakthrough' describes his journey in uncovering the new treatment protocols and gaining access for Ann. You'll be glad you read it.