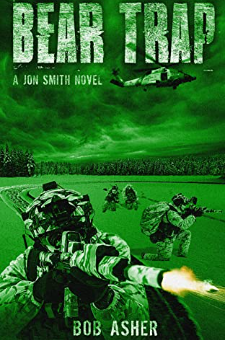 Ruthless Russian Spetsnaz soldiers are marauding the Alaskan wilderness killing everyone who has the misfortune to stumble across their path!

"A fast-paced, action-packed military thriller that will have readers on the edge of their seats. Bear Trap takes America’s best out of retirement to retrieve a Soviet-era defector from a group of Russian Spetsnaz kidnappers ready to kill without hesitation. An exhilarating mission written with the precision and attention to detail of someone who has clearly been on the battlefield, this book is easily capable of becoming an award-winning movie."

“Bear Trap's title perhaps holds a portent of its strengths, because it certainly traps its readers with a thoroughly engrossing read that is impossible to put down—or predict.”

- Diane Donovan, Midwest Book ReviewFortunately, CIA Paramilitary Operations Officer and retired Navy SEAL, Jon Smith, has just arrived in Homer, Alaska for a well-deserved vacation.The Russians have invaded America to bring a defector, former KGB Colonel Oleg Karpinsky, back to the Motherland. Days after the Berlin Wall came down Karpinsky defected. Thirty years later, Dr. Karpinsky is a respected CIA scientist conducting research in the paranormal sciences. He uses a method like ESP called Remote Viewing to gather intelligence on America’s enemies and allies. He is enjoying his annual winter vacation in an isolated cabin in the frozen Alaskan wilderness with his personal security detail (PSD) when the NSA intercepts a message from the Kremlin ordering his covert extraction. Attempts to warn them via their satellite phone go unanswered. The President orders the Pentagon to retrieve them before the Russians can attack. There’s only one problem.Alaska is experiencing severe icing weather that has grounded all military air assets within range of the cabin except for a lone Coast Guard Jayhawk helicopter on the ramp at Homer Airport. The Pentagon scrambles to assemble an ad hoc rescue team for a possible suicide mission facing a highly trained team of Spetsnaz operators.

Can Jon Smith and his ragtag group of Red Shirts save Karpinsky before time runs out?

BEAR TRAP is the first standalone book in the Jon Smith series of action-packed military/espionage thrillers. It’s perfect for fans of Mark Greaney, Tom Clancy, Brad Thor, and Marc Cameron. If you like their books, then you'll love BEAR TRAP. It combines all their best traits in a captivating, thrill ride pulled right from today’s current events.

Buy BEAR TRAP today and get a front row seat to this action-packed thrill-ride!

This is the novel the FBI and CIA don’t want you to read!

After being delayed by the US Government for over a year, it’s finally here! The author, Bob Asher, is a currently serving supervisory intelligence officer with the National Geospatial-Intelligence Agency (NGA).