Year of the Chick 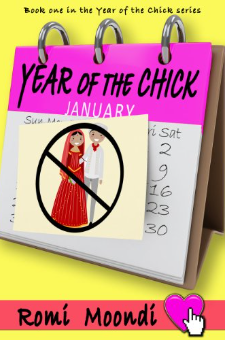 [Book 1 in the "Year of the Chick" series. There's a bit of a cliffhanger to end this book, but the sequel addresses any unanswered questions]An awkward family homecoming at Christmas.A humiliating public weigh-in, with two judging parents as the audience.The announcement of a deadline for arranged marriage doom.And that's just the first two chapters.In "Year of the Chick," Romi Narindra must find love before her parents find her a husband (a seemingly absurd concept that's the norm in many cultures). To escape her fate, Romi wades through the waters of secret-dating, where self-consciousness is at an all-time high, and experience at an all-time low. It's the sort of thing that would turn almost anyone into a man-crazy freak with romance tunnel-vision, and that's exactly what happens to her. All the while, a lack of inspiration in her corporate job leads Romi to her love of writing, in what quickly becomes a man-quest play-by-play.From whiskey-breath scum bags to uni-brow creeps and everything in between, Romi and her wingmen come up empty time after time. And that's when she meets a fellow writer. On the Internet.So will it be arranged marriage doom, or an Internet affair that's not as creepy as "To Catch a Predator"? Time will tell in the "year of the chick," a twelve-month quest to find love.Tick-tock.---------------------------------------------"Year of the Chick" is book 1 in a series, and the sequel "Last-Minute Love" is available now!LENGTH: 75,000 words or 288 pagesDISCLAIMER: this book contains profanities, blunt accounts of the dating scene, and cringe-worthy awkward family moments