Wrong! Retro Games, You Messed Up Our Comic Book Heroes! 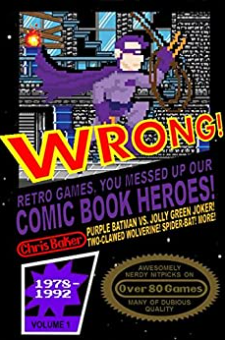 SEE THE TRAILER AND SIMILAR CONTENT AT youtube.com/cbake76THE MOST MESSED-UP MOMENTS FROM 14 YEARS OF SUPERHERO VIDEO GAMES – AWESOMELY NERDY NITPICKS!If you're a superhero fan who loves video games, you've experienced firsthand how pretty much every title out there – good or bad, remembered or forgotten – does something that's absolutely, unapologetically WRONG! with its source material. This ebook documents the most egregious – and most hilarious – offenders from the moment Superman flew onto the Atari 2600 in 1978 all the way through 1992, when Konami's classic X-Men sucked in quarter after quarter in arcades.NEARLY 80 SUPERHERO GAMESSome you've played. Some you haven't. And quite a few you never even knew existed in the first place. Some high-/lowlights:Purple Dark Knight vs. Green Joker in Batman: The Video Game (NES)Proven instances of "slapping a license" on an already-developed gameGames that stripped Wolverine and He-Man of their most iconic weaponryA questionable transportation method for the Man of Steel in Superman (NES)A Transformers game from the creator of Pitfall!The strangest comic book license ever to hit the Sega GenesisThe most unnecessary tie-in to a superhero animated series of all timeThe Danger Mouse TrilogyThat one lonely Thundercats gameANSWERS TO BURNING QUESTIONS YOU DIDN'T EVEN KNOW TO ASKWho is "the Princess Peach of superhero games"?Who was the first Marvel character to be featured in three games? And what's the single gaming appearance he's had since 1985?Which super-character is most consistently misrepresented in games? What common superhero gaming feature was pioneered by LJN's otherwise absolutely horrible X-Men NES game?Which hero's primary gaming nemesis is someone he still has yet to even meet in the comics?What do an NES game and a major restaurant chain agree is Wolverine's favorite food?Why is Carnage getting naked on my SNES?!GAMING PLATFORMS YOU LOVED...OR DIDN'T KNOW EXISTEDAtari 2600 | Intellivision | Commodore 64 | Nintendo Entertainment System | Game Boy | Super NES | Sega Master System | Genesis | Game Gear | Lynx | ZX Spectrum | MSX | PC-DOS | MORE! YOUR FAVORITE HEROES (AND SOME YOU'VE NEVER HEARD OF)From Marvel! Spider-Man | Wolverine and the X-Men | Hulk | Captain America, Iron Man, Hawkeye, Vision, and a bunch of other Avengers | Punisher | Human Torch and the Thing from the Fantastic Four | Silver Surfer | Howard the DuckFrom DC! Superman | Batman | Flash | Swamp ThingFrom Other Comic Publishers! Conan | Flash Gordon | Judge Dredd | Ex-MutantsFrom Toy Lines and Cartoons! Transformers | Teenage Mutant Ninja Turtles | He-Man and the Masters of the Universe | Bartman and Radioactive Man from The Simpsons | G.I. Joe | Danger Mouse | Gobots | ThundercatsFrom Commercials! Domino's Pizza's Noid | Kool-Aid ManFrom Copyright Infringement! The Amazing Spider-Bat | Baseball Batman ABOUT THE DUDE WHO WROTE THIS STUFFWith years-long stints at Marvel and LucasArts (you know...home to Star Wars games), Chris Baker has played a role in the release of more than 40 game releases since 2005. To name a few: Marvel vs. Capcom 3, LEGO Marvel Super Heroes, Spider-Man: Shattered Dimensions, Marvel Pinball, Star Wars Battlefront II, LEGO Star Wars II...plus quite a few he'd rather not mention while trying to make himself sound awesome. He also worked in the games press from 1998-2005, most notably as an editor at Official U.S. PlayStation Magazine, where he wrote about hundreds of games.