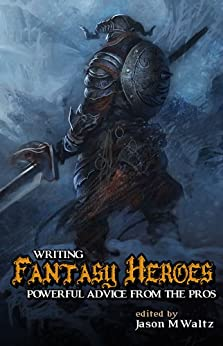 Where are your heroes? Are they trapped inside the stories in your head? Are you ready to share them, to brag of them, to tell of their deeds and battles, their daring and sacrifice? Are you a storyteller ready to write the tales of your own heroes? Fantasy heroes endure. They are embedded in our cultural fabric, dwarfing other literary figures and the mere men and women of history. Achilles and Odysseus, Gilgamesh and Beowulf. King Arthur and Robin Hood, Macbeth and Sherlock Holmes, Conan and Luke Skywalker. They dominate our legends, and tower over popular culture.The stories we tell each other begin and end with fantasy heroes, and the 21st Century is as thoroughly captivated with them as ever. From Batman to Gandalf, Harry Potter to Tyrion Lannister, the heroes of fantasy speak to—and for—whole generations.But what makes a fantasy hero? How do the best writers create them, and bring them to life on the page? In WRITING FANTASY HEROES some of the most successful fantasy writers of our time—including Steven Erikson, Brandon Sanderson, Janet Morris, Cecelia Holland, Orson Scott Card, Paul Kearney, and Glen Cook—pull back the curtain to reveal the secrets of creating heroes that live and breathe, and steal readers' hearts.Whether you're an aspiring writer or simply a reader who loves great fantasy and strong characters, this book is for you.