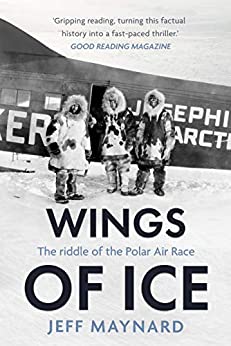 A story that’s waited 90 years to be told.

Wings of Ice reveals the fierce rivalry between two flawed polar heroes: Sir Hubert Wilkins and Admiral Richard Byrd. It tells the story of their pioneering flights in the 1920s, while laying out clues and challenging the reader to solve an eighty-year-old mystery.

On 8 May 1926 three expeditions were locked in a race to fly to the North Pole. Hubert Wilkins was at Barrow, Alaska anxiously waiting for clear weather. Richard Byrd was at Kings Bay, Spitsbergen hurriedly building a runway for his plane. Roald Amundsen was also at Kings Bay repairing his airship. Shortly after midnight Byrd flew north. He returned 15 hours later and claimed he had reached the North Pole.

A year later Byrd announced his intention to be the first to fly to the South Pole. Wilkins, who had just completed a record-breaking flight in the Arctic, was hired to beat him. Six months later they unloaded their planes on opposite sides of Antarctica and prepared for the last great race in polar history.

Byrd won and became an American icon. During his life no one dared question his claims. It was only after his death in 1957 that he was accused of being ‘the greatest fraud in polar history’. Wilkins died in 1958 and disappeared from the history books after his jealous, secretive wife locked away his records and diaries.

Factually based and methodically researched, Wings of Ice reveals what really happened on Byrd’s polar flights and traces the lost records of Sir Hubert Wilkins. It brings to light an untold story of courage, daring and adventure, while exposing secrets and lies that will rewrite polar history.

Praise for Wings of Ice:
'Reads like a fabulous adventure story' - booktopia.com

'Maynard presents the various controversies, along with in-depth documentation. A must-read' - Clive Cussler

Jeff Maynard is an author and documentary maker. His books include Niagara’s Gold, Divers in Time and The Unseen Anzac. He is a former editor of Australian Motorcycle News and retains a keen interest in classic motorcycles. He is a member of the Explorers Club and on the board of the Historical Diving Society. Jeff lives in Melbourne, Australia, with his wife, Zoe, and their family.