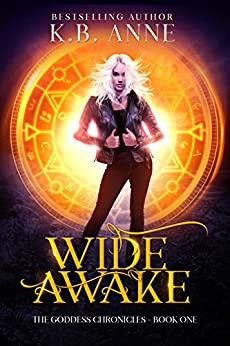 Gram tells me Druids live among us. They worship the forgotten Celtic gods that once ruled the Earth, and for centuries, they’ve practiced in Vernal Falls without incident.

I know nothing about Druids or Celtic gods. I only know the visions began when Breas, the new foreign exchange student, moved in next door. I also know my best friend Lizzie is obsessed with the spell book I found in Gram’s attic.

And someone is following me, which I find oddly comforting.

Breas provokes me—I mean really pisses me off. My friends protect me—but it’s mostly from myself. And a mysterious stranger wants me and I’m not sure what his intentions are, but I’m willing to take the risk.

Meanwhile, evil forces are supposed to be at work, and I need to decide if I’m the one to save them all. Guess what I think?

Begin the **NOW COMPLETED** six book series everyone is talking about. The Goddess Chronicles by KB Anne is a fast-paced urban fantasy series filled with twists you will never see coming. Guaranteed to cause book hangovers. The Goddess Chronicles features a sharp-witted heroine, swoon-worthy hero, and one epic rollercoaster romance set in Ireland!

The Silver Fae:
Throne of Silver
Silver Fae Hunter
Heir of Wings and Shadows
A Court of Silver Fae