Whirlwind: War in the Pacific 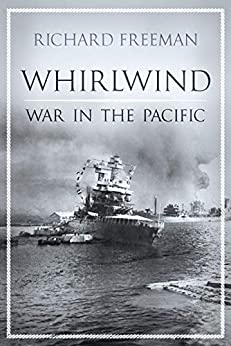 In just six months, America turned the rout of Pearl Harbor into the victories of Coral Sea and Midway.
Whirlwind: War in the Pacific tells the story of how America achieved this staggering turnaround using accounts of the three key Pacific battles of 1942.
Pearl Harbor: Hinge of War
When Japan launched a surprise attack on Pearl Harbour on 7 December 194, thousands of American lives were lost and their military resources diminished. The story of the raid is one of Japanese military skill meeting American courage, officially drawing the US into the Second World War.
Coral Sea, 1942
Following setback after setback after Pearl Harbour, the US sent Admiral Frank Fletcher with two aircraft carriers to destroy the Japanese invasion force before they could take Port Moresby in New Guinea. The fate of the Pacific hung in the balance. The Americans suffered heavy losses during the conflict, but the battle was the triumph the US desperately needed, finally giving them a leg up over Japan. The tide had turned.
Midway
Fought by hundreds of planes thousands of miles away from land, Midway saw four massive Japanese aircraft carriers pitted against three huge American carriers in a battle for domination of the Pacific. The battle raged over three days, full of setbacks for either side – until Admirals Yamamoto and Nagumo suffered the greatest naval defeat in history. America entered Midway on the defensive, still a hesitant participant in the war. She left the battle as the world’s first superpower.
Whirlwind: War In The Pacific is a brilliant narrative history of three of the crucial naval battles of the Second World War. It is essential reading for anyone interested in the period.
Praise for Richard Freeman:
‘Well-written… especially rewarding’ - Navy History
‘Freeman has done an excellent job… an interesting volume’ - Historic Naval Fiction
Richard Freeman graduated in mathematics before following a career in distance education. He now writes on naval history. His other books include Midway, Pearl Harbor and Coral Sea 1942.