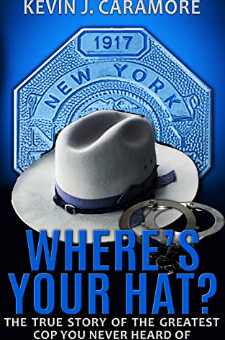 This is a story of a New York state trooper told by another trooper. The story is about Sean Ruane, who worked for the state police for 21 years and was responsible many notable cases including 4 murder arrests. During Sean’s uniform career he would be responsible for the capture of 2 violent prison escapees one serving time for a double murder and another serving time for shooting a Linden, New Jersey police officer. That same year he would find the man that brutally murdered an elderly couple at a Catskill Bungalow. Sean then transfers to Long Island, where he was responsible for the capture of Joel Rifkin, a serial killer that killed 17 women. Five years after Rifkin, Sean would be responsible for the arrest of 2 men running for the scene of a murder in New Castle. The story follows Sean from his training at the state police academy through the different stations he worked at in New York. The title _Where’s your hat?_ is an ongoing joke throughout the story, it is something any uniform officer has heard during their career from a supervisor, often at the worst possible moment.