When the Airlines Went to War 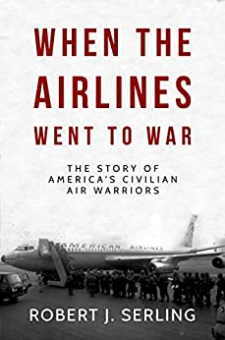 The Dramatic, untold Story of America’s Civilian Air WarriorsIn the East, Japan had invaded China. In the West, Europe was being overrun by Hitler’s war machine. And in the U.S., America’s commercial airlines were stepping into a vital role that would make the difference between victory and defeat…From Robert J. Serling, one of America’s most honored aviation authors, comes a dramatic chronicle of the glory days of the propellor plane, when the young, ambitious domestic airlines—led by shrewd, independent-minded businessmen—met up with military olive drab. It is the story of airline pioneers and pilots, mechanics and engineers, who overnight learned the art of night and transoceanic flying, moving cargo that included troops, ammunition and medicine, and were kept running by ingenious mechanics who borrowed from visiting planes.A must-read book for aviation fans and World War II history buffs, When the Airlines Went to War takes you inside the hulls of the transport planes, through harrowing, secret missions from Newfoundland to India and Guadalcanal, and into the top-level meetings between the airline owners and Roosevelt’s White House that led to the development of the ATC (Air Transport Command) and the NATS (Naval Air Transport Service). A story of courageous pilots and remarkable flying feats, this is also a history of how a fledgling industry developed into a crucial military operation, and how it came out of the war not only victorious, but ready to change the shape and pace of air travel forever.Robert J. Serling has written about flying in fiction (The President’s Plane Is Missing, Air Force One Is Haunted) and nonfiction; this is his seventh book on aviation. He and his wife live in Tucson, Arizona.