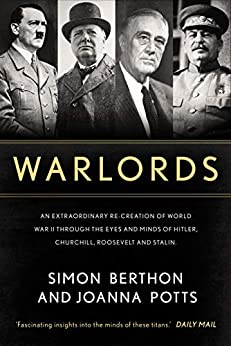 Warlords recreates in forensic and gripping detail the extraordinary mind games between Churchill, Hitler, Stalin and Roosevelt as World War Two unfolded day by day.
In a unique combination of innovative style and thorough scholarship, Warlords tells the story of World War II through the lives of the four great war leaders: Adolf Hitler, Joseph Stalin, Winston Churchill, and Franklin Roosevelt.
While their nations fought battles with weapons, the four warlords of the twentieth century fought a war of the mind. Structured along the lines of a cinematic thriller, rapidly cutting from one man to the next, the book takes us blow by blow as they try to outthink and outfight each other. These encounters are told on a day-by-day, even hour-by-hour basis, affording unparalleled insights into parallel actions.
Moving from Whitehall and Washington to the Wolf's Lair and the Kremlin, Warlords documents the psychological battles among the leaders and shows how their thoughts and actions changed history.
Praise for Joanna Potts and Simon Berthon:
’Gripping, innovative and perceptive… It reads like a thriller but it is also a scholarly, impeccably researched piece of work… superlative’ - The Tribune
‘Fascinating insights into the minds of these titans’ - Daily Mail
Simon Berthon is a distinguished writer and producer of historical documentaries and is the author of Allies at War. Joanna Potts has worked on a number of television series including Empire by Niall Ferguson