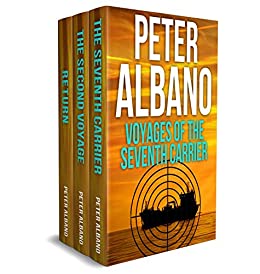 For more than forty years the Yonaga – once Imperial Japan’s finest battleship – lay trapped beneath a glacier. Now, they have been freed from their icy prison.

The crew are determined to complete their mission and soon set sail for Pearl Harbor, decades after the Second World War ended.

Unaware of this ghostly mission from the past, Ted "Trigger" Ross travels aboard the steamer Sparta, through the Bering Sea. When the two ships cross each other's paths, a baffling but deadly conflict erupts as the Japanese soldiers continue their mission which, to them, has never been revoked.

Over three fascinating novels, Peter Albano explores the questions posed by this conflict: ones of loyalty, patriotism, war and alternative history. The three books in this box set are continued in the acclaimed eleven-part series.

Peter Albano was a writer who served in the US Navy from 1942-1946. He is best known for the Seventh Carrier sequence of military adventures starring the World War Two Japanese aircraft carrier, Yonaga.