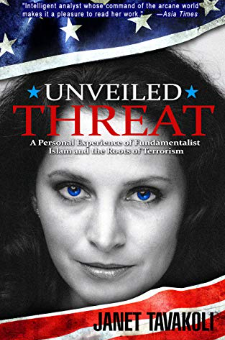 Clash of CivilizationsIn 1978, Janet Tavakoli, a Christian of European heritage born and raised in the United States, moved to Iran with her husband. The large class divide, grand ambitions of the insecure Shah, discontent among religious leaders, brutality of the Shah’s dictatorship, and boiling resentment of the United States’ role in the overthrow of Mohammad Mosaddegh were about to spark the Islamic revolution. The following year she fled Iran and began her career as a globally renowned financial derivatives expert. In 1993, she was in the World Trade Center complex when terrorists detonated a bomb in the parking garage of the North Tower. In September 2014, Tavakoli asked His Excellency Iyad bin Amin Madani, Secretary General of the Organization of Islamic Cooperation (OIC), why criminals from so many different countries and cultures continue to band together in the name of Islam to commit mayhem and murder authorized by the highest levels of Islamic clergy. He dodged the question. Unveiled Threat is her answer based on her personal experiences and study of the roots of terrorism.