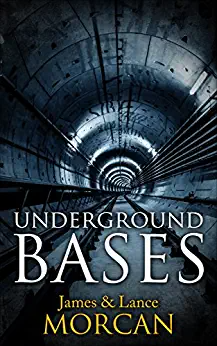 What do the world’s superpowers get up to in their secret underground bunkers?UNDERGROUND BASES: Subterranean Military Facilities and the Cities Beneath Our Feet, by novelists, filmmakers and independent researchers James Morcan & Lance Morcan, details confirmed and rumored underground facilities in the United States and around the world. Containing rare photographic evidence throughout as well as little-known quotes from key government figures, it makes a compelling case for there being an enormous hidden world under the Earth's surface.The Morcans speculate that the covert underground infrastructure may be far bigger than anyone has previously supposed and is likely used for the development of suppressed technologies. Their sources include declassified files, university reports, WikiLeaks’ documents and interviews with ex-military personnel turned whistleblowers who claim to have worked in “cities below ground”.UNDERGROUND BASES delivers a vast array of facts and theories that ultimately allows readers to form their own conclusions. The exposé covers everything from: the US Department of Defense’s verified evacuation areas beneath the White House and the Pentagon as well as their acknowledged sites at Mount Weather and Cheyenne Mountain; underground facilities around the world including Russia’s sprawling Mezhgorye complex and Australia’s CIA-managed Pine Gap; the long-forgotten newspaper headlines which reported that Adolf Hitler and senior SS officers may have built a Nazi colony beneath Antarctica after WW2; rumors that human-alien joint ventures are occurring below ground and that kidnapped citizens are being detained in subterranean prisons for illegal medical experimentation such as cloning.Why are the Global Elite spending trillions of dollars of their black budgets to build such vast networks of underground (and undersea and under-ice) sites? Are they simply preparing for emergencies as per official government explanations? Do they believe an Armageddon scenario is imminent? Are they secretly collaborating with extraterrestrials? Or, are they literally creating a breakaway civilization separate to the rest of humanity? To attempt to address these and other questions, UNDERGROUND BASES takes readers on a vicarious journey into miles-deep military bases and other subterranean facilities not known to the general public.