Trump’s Second Term: What if? 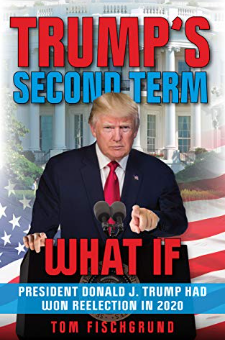 America is in crisis. The country is locked down with a pandemic. The economy is deteriorating. Businesses are going bankrupt. 40 million people are unemployed. The country’s health system is in tatters. There are protests and rioting around the country. Relations with China are at an all-time low. It also is a presidential election year. The country is divided. Despite the myriad of problems the country faces, the race is very close. Within this context of America at a turning point, what if Trump had won reelection in 2020. What would happen?From Trump’s reelection in 2020 until the time he leaves office, this story of America is played out in graphic detail with some good, some bad, some horrible, and some redemption. It is told through the eyes of both the President’s supporters and detractors. During his second term, Trump will aggressively promote his vision and agenda. Some will try anything to stop him, but will they succeed?This is a story of a troubled America and its political leadership. People must follow their consciences or their party. Everything that happens in this book is plausible but not predictable.In Trump’s America, no one can sit on the sidelines.