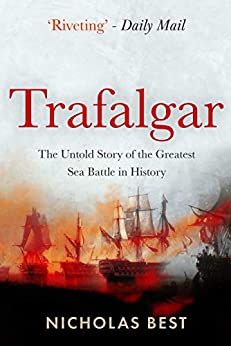 Two hundred years ago Napoleon Bonaparte planned to lead his Grande Armée to Britain, the only country still defying him.
From Bonaparte’s headquarters to the admirals’ flagships, from William Pitt and his volunteers on the English coast to the lower decks of the British, French and Spanish battleships, in Trafalgar we see the story unfold at every level as the fleets manoeuvre for advantage.
Nicholas Best’s original research has drawn upon a wide range of eyewitness accounts to craft a minute-by-minute recreation of the most famous sea battle of all time.
Praise for Trafalgar:
‘Trafalgar was not only a great sea battle, it saved Britain from invasion by Napoleon. That is why this book, which rattles along excitingly, gave me fresh appetite for the subject. It sets Nelson’s victory in that context – the risks of 1940 were just as grave in 1805 …’ - Peter Lewis, Daily Mail
‘This gripping book tells the story of Britain’s legendary naval victory on October 21, 1805 in which the national hero, Admiral Lord Nelson, was killed by a French sharpshooter … Nicholas Best has done an excellent job describing the build up to the Battle and the primitive conditions on the ships … This book is replete with fascinating details’ - Anthony Looch, Glasgow Evening Times
‘You can almost smell the whiff of gunsmoke and feel the sweat on both sides as the battle begins. This is history with a page-turning quality’ - Good Book Guide
Nicholas Best grew up in Kenya and graduated from Trinity College, Dublin before joining the Grenadier Guards. He became a financial journalist after leaving the army and later a full-time author. He has written novels, travel and history books, and was the Financial Times’ fiction critic for ten years. He lives in Cambridge.