Too Secret Too Long 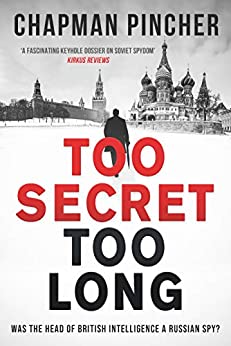 Chapman Pincher, the Cold War and the spy scandals which shocked the nation.

Chapman Pincher, the “lone wolf of Fleet Street”, is now regarded as the godfather of investigative journalism. During the Cold War era he became notorious as a relentless investigator of spies, uncovering the shocking extent of Soviet infiltration of the British Secret Services – and the collusion and incompetence at the heart of the British Establishment.

Pincher’s Their Trade is Treachery, published in 1981, became an instant classic. While helping to unmask the Cambridge five, the conclusion he drew was that there must be someone right at the heart of the Secret Services who allowed these men to go undetected. And he concluded that it could be none other than Roger Hollis, then head of MI5.

In this sequel he presents a compelling case against Hollis, with a torrent of new disclosures about the appalling extent to which the British secret services had been penetrated and manipulated by Soviet agents. Pincher builds evidence that Hollis, the man he calls ‘Spy of the Century’, must have colluded. Working with him was a woman, Moscow trained, of such dedication and courage that she qualifies to be regarded as the most successful female spy ever.

Too Secret Too Long paints a riveting picture of Cold War espionage, of corruption within the British Secret Service and the cover-ups by successive governments.

Chapman Pincher was born in India in 1914 and educated at Darlington Grammar School and Kings College London. He worked for the Daily Express in London’s Fleet Street for over thirty years. Famed for his exposés, he is regarded as one of the finest investigative reporters of the twentieth century. He is the author of a number of books, both non-fiction and fiction. He died in 2014 aged 100. His son Michael reported that his last joke was “tell them I’m out of scoops”.