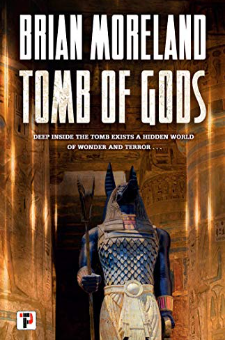 “The suspense of the story, aided by sly hints from the author, and the atmosphere of a dark, claustrophobic tomb work together to create a scary story. The characters’ fear invites the reader into the world to experience the fright themselves.” — Booklist Starred Review Deep inside the tomb exists a hidden world of wonder and terror. In 1935, British archaeologists vanished inside an Egyptian cave. A year later, one man returned covered in mysterious scars. Egyptologist Imogen Riley desperately wants to know what happened to the ill-fated expedition led by her grandfather. On a quest for answers, she joins a team of archeologists and soldiers in Egypt. Inside a mountain tomb, they’ve found a technologically advanced relic and a maze of tunnels. Dr. Nathan Trummel believes this tomb leads to the most guarded secrets of the pharaohs. When the explorers venture deep into the caves, they discover a hidden world of wonder and terror.FLAME TREE PRESS is the new fiction imprint of Flame Tree Publishing. Launched in 2018 the list brings together brilliant new authors and the more established; the award winners, and exciting, original voices.