Till the Old Men Die 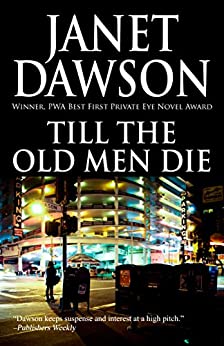 But in fine PI mystery fashion, the case isn’t at first what it seems. It begins small, with the grisly murder of a sedate, widowed history professor, written off as a random street crime until a woman turns up at his university, claiming to be his widow and demanding access to his “papers.” Jeri’s called into the case by her father, a good friend of Lito, the murdered Asian Studies professor, who tells her about a mysterious envelope he received from his friend on the day of his funeral.

A note with the package said “keep it safe”. And Jeri knows that’s the key: whatever was in it is behind Lito’s murder. Sure enough, it's gone missing.

And Lito was just back from a research trip to the Philippines. What, she wonders, did he learn there? Once she realizes his research subject was the Japanese invasion of the Philippines in World War Two, things take a sinister international turn.

Off she goes, searching for answers in Lito’s close-knit Filipino community, a world alive with music, food, celebrations – not to mention power struggles, treachery, and betrayal. And then the case heats up. Because the past never dies—it just gets covered up.