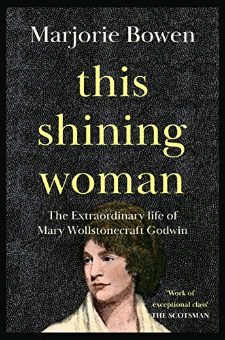 Now chiefly remembered as the author of

A Vindication of the Rights of Woman

, Mary Wollstonecraft Godwin has often been acclaimed as a prophetess of the emancipation of her sex — a woman who did much to smooth the way for subsequent female triumphs.

But Mary’s life was plagued by poverty, misery, and despair, with only a few snatched moments of happiness to keep her going. Born into a family of impoverished gentility, she spent her childhood as a drudge in her own home, subject to a drunken father and largely responsible for her four younger siblings. Exposed from a very young age to the power men hold over women, and the scarcity of choice women have in submitting and obeying, Mary formed opinions of the equal rights of women that stayed with her for many years. But ideals and reality often do not coincide, as Mary discovered in her own relationships with men. Hungry for affection and love, she entered into an affair with Gilbert Imlay and lived with him, having fallen deeply in love with him and knowing he could not be had on any other terms. Mary subsequently lived with William Godwin; mentally exhausted and emotionally broken, she was lonely and eager for some imitation of the life she had led with Imlay. Death served as a release from the unhappiness and anguish that had dogged Mary’s footsteps from birth, leaving behind a legacy that spoke of a strong and proud feminist.

was born in 1885 on Hayling Island in Hampshire. She and her sister grew up in poverty, but Bowen was eventually able to study at the Slade School of Fine Art and later in Paris. Her first novel, the violent historical

The Viper of Milan

(written when she was 16) was rejected by several publishers, who considered it inappropriate for a young woman to have written such a novel. It went on to become a best-seller when eventually published.