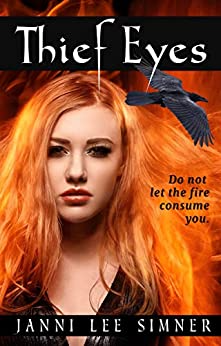 “A captivating modern odyssey.” —Publishers Weekly When Haley gets caught between an ancient spell and a modern betrayal, the world itself could burn. After her mother mysteriously disappears, sixteen-year-old Haley convinces her father to take her to Iceland, where her mother was last seen. There, amidst the ancient fissures and crevices of that volcanic island, Haley picks up a silver coin that entangles her in a spell cast by her ancestor Hallgerd, a sorceress intent on stealing another’s life to escape her own.To break the spell, Haley sets off on an epic adventure with Ari, a boy with a dangerous side who appoints himself her protector. They soon learn that Hallgerd’s spell and her mother’s disappearance are connected to a chain of events that could unleash terrifying powers and consume the world. Haley must find a way to contain the growing fires of the spell—and her growing attraction to Ari.Thief Eyes weaves medieval characters from the famous sagas of Iceland—full of fierce love and violent passions—into the twenty-first century with spellbinding results.Reviews“Adopting figures from Icelandic sagas, Simner (Bones of Faerie) creates a captivating modern odyssey … Incorporating references to Star Wars and Norse myth alike, Simner is poetic whether writing about magic and sorcery or simply getting inside her characters’ heads.” —Publishers Weekly“Simner’s second book, a fantasy set in modern times but rooted in ancient Icelandic sagas, has great reader appeal. The plot is compelling–a page-turner … The climax is a humdinger, and while the resolution is bittersweet, it makes sense and is consistent with the magical rules of the book. There’s some innocent romance to pique reader interest, while dark magic will attract readers who enjoy touches of Norse mythology in their fantasy reading.” —Kirkus“Simner skillfully weaves Haley and Ari’s modern emotional struggles into the ancient saga and enlivens the story with an intriguing cast of characters from the original tale. With its urgent pace and unique setting, this offering from the author of Bones of Faerie will stay with readers.” —Booklist“This appealing novel centers around and embellishes Icelandic legend—specifically Njal’s Saga. Simner takes the old stories and brings them into the 21st century in this cyclical novel about the powerful relationship between mothers and daughters.” —School Library Journal“This book will keep readers turning pages as the two teens face dangers, test their own courage and stamina, and learn that things aren’t always simply right or wrong. The story is compelling from the start … a fast read that will have teens reading into the night to finish it quickly.” —Assembly on Literature for Adolescents (ALAN)“Simner brings the remote, quake-racked island vividly to life … She inhabits her Iceland with complex, sympathetic characters who pay steep costs for the actions of others and themselves. She skillfully blends ancient Icelandic legend (specifically, Njal’s Saga) and Scandinavian myth with the modern world.” – Fantasy Magazine“The scariness and apocalypse of the source material is well reflected here. It’s a smart book, without easy answers, and Haley’s struggle to integrate her childhood perceptions of her parents with adult realities rings very true.” —Realms of FantasyA YASLA Best Books for Young Adults (BFYA) nominee, ALAN Pick, and Bank Street Best Book