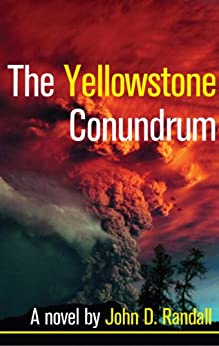 The Yellowstone Caldera, the most dangerous hot-spot on the surface of the earth, erupts with a series of 11.2 earthquakes and spews volcanic ash high into the atmosphere. Six hundred miles away a 9.45 quake under Puget Sound causes massive destruction to Seattle as a tsunami strikes and destroys most of the waterfront. The Fort Peck Dam in Montana on the Missouri River fails as does the Jackson Dam on the Snake River. The power grid in the Western United States quickly disintegrates, with utility companies fending for themselves. Power outages reach the East Coast.The Yellowstone Conundrum is a page-turning novel with readers following eight characters as they scramble out of harm's way on Day One; everyday people put into extraordinary situations, with the President of the United States and his cabinet scrambling in the background to find how to escape from lose-lose scenarios.The Columbia Generating Plant on the Hanford Nuclear Reservation suffers great damage and begins a meltdown. Bridges in Portland collapse. Infrastructure in the NW is severely damaged and thousands are killed; Salt Lake City, Boise, Denver and every city, town and village in the Pacific Northwest are affected.The massive Death Cloud from the Yellowstone explosion sends volcanic ash into the jet stream, which then begins to carry the heavy ash south across Wyoming, over Denver until it catches up with a low pressure system advancing across Texas.Follow army vet Ray Spaulding as he survives the crash of a WSDOT ferry in the tsunami, then manages to save, then lead a handful of everyday people who rally together to save the Seattle Public Library from destruction by gangs.University of Washington professor Denny Cain and student Karen Bagley vow to get out of Seattle, only to find themselves in a firefight as the local Seattle gangs attempt to claim the night.Skier Penny Armstrong fights her inner demons by skiing north toward Billings in an attempt to avoid the Death Cloud.Long-distance trucker Cameron Hedges is forced to step out of character as he first rescues Betsy Jamison, then convinces an entire town to move out of harm's way.Robert and Nancy O'Brien, both up-and-coming managers within the Department of the Interior are separated by their jobs, then by the earthquake and explosion.The President of the United States must deal with his own Kobayoshi Maru, with a series of impossible lose-lose scenarios as the power grid in the United States collapses.