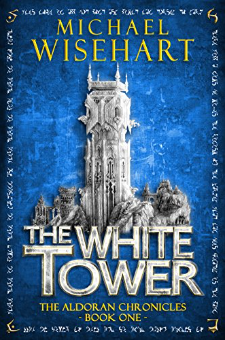 $0.99 - Limited Time SaleWinner - National IE Award for Fantasy.Winner - Readers Favorite for Epic Fantasy.Winner - Beverly Hill Award for Epic Fantasy.RunnerUp - Kindle Book Awards for Fantasy.They are feared, hated, hunted down, and destroyed...... and yet they are mankind's last hope.For a thousand years magic has been banished throughout the Five Kingdoms, and those caught wielding it are rounded up and taken to the White Tower. They are never heard from again.Ty knows he's different. But when the bounty hunters arrive in the quiet city of Easthaven, his family reveals the shocking truth about his magical bloodline. And when an Ahvari witch hires a tribe of Northmen to capture him, Ty finds himself in the middle of a war he didn't know existed.Armed with nothing but his will to survive, Ferrin attempts what no prisoner has ever accomplished and vows to escape the White Tower. His only hope is Rae, a gifted healer tasked with keeping the prisoners alive during the inquisitors' brutal interrogations. Will she be willing to risk her own life for that same chance of freedom...Ayrion outworked his fellow soldiers for years to become captain of the guard. But his strength and valor alone won't be enough to stop the bloodthirsty creatures coming for his king. And when a sweeping number of the city's outcasts begin to mysteriously disappear, he realizes that the threat is closer than he knew...War is coming, the likes of which hasn't been seen since the time of the Khul Hordes. How will humanity fight back when those with the ability to do so are being exterminated?***Grab the first installment in this award-winning epic fantasy series, filled with magic and monsters, sword and sorcery, heroes, villains, and those in between.