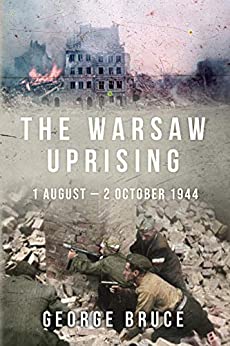 An engrossing history of the largest resistance movement in the Second World War.

By the summer of 1944 Poland had been occupied by Nazi forces for nearly five years, but on August 1 the people of Warsaw attempted to throw off their shackles and rise up against their Nazi oppressors.

For sixty-three days German tanks, planes and artillery crushed the ill-equipped Polish Home Army leading to the deaths of 16,000 Polish resistance fighters and over 150,000 civilians, as well as leaving only fifteen percent of the city intact.

Could Britain, America and the Soviet Union have done more to rescue their allies?

How did this Polish secret army organize itself and train while their city was under control of the Nazis?

And in what ways did five years of occupation and events such as the Katyn massacre and Warsaw Ghetto Uprising shape the actions of the Polish resistance?

George Bruce’s book explores the history of Warsaw and Poland through the Second World War and provides an eye-opening account of the oppressed men, women and children's courageous attempt to resist the Nazis.

‘One of the most heroic, as well as tragic, episodes of the Second World War … movingly related in a valuable book’ The Army Quarterly

‘Mr Bruce has gone to immense trouble to research his facts and figures, and the result is yet another condemnation of the appalling brutality of the Hitler regime.’ Manchester Evening News

‘Mr Bruce’s calm, comprehensive account is most welcome. His careful researches in London and Warsaw included personal interviews with many of the survivors of the Polish leadership.’ The Economist

The Times described Bruce’s books as ‘well researched, with a keen eye for historical detail.’

The Warsaw Uprising not only traces the sequence of events but examines the political and ideological background of the Uprising. It is a captivating work that should be essential reading for all who wish to learn more about this monumental event.