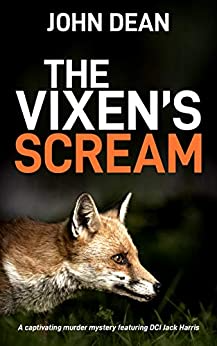 A sleepy hillside town is beset by a spate of burglaries followed by a murder. Detective Jack Harris must quickly uncover the link between them.A series of blood-curdling screams heard in the dead of night has a London woman new to the rural area convinced that a murder has occurred.When the body of a young woman is in fact found, rumours quickly spread that a serial killer is at work in the small Pennine community of Levton Bridge.The clues begin to point to a connection with other missing women and the pressure from on high to find answers increases ten-fold.Fighting the media circus’s constant attempts to thwart the investigation, detective Jack Harris must also battle the confusion and doubts among his own team in order to find the killer.If you enjoy traditional British murder mysteries, look no further than THE VIXEN'S SCREAM. It is the second book by John Dean to feature DCI Jack Harris. The full list of books is, in order of publication:1. Dead Hill2. The Vixen's Scream3. To Die Alone4. To Honour the Dead5. Thou Shalt Kill6. Error of Judgement7. The Killing Line8. Kill ShotAll of these books are FREE with Kindle Unlimited and available in paperback.