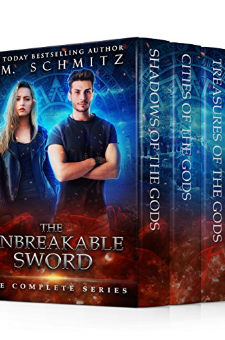 All four books of The Unbreakable Sword series in one boxset!Shadows of the GodsAs a powerful demigod, Selena has been running from the gods who control the government agency, the New Pantheon, for the past three years, but now, they’ve caught up to her. When they trap Selena in an alleyway in New Orleans, she is ready to admit defeat. But an unfamiliar demigod rescues her, and the more she learns about Cameron, the more she discovers their common bonds may be the key to unraveling her own mysterious history. In the first book of The Unbreakable Sword series, Selena and Cameron must not only evade the New Pantheon, which is ruthlessly hunting the remaining gods and their descendants, but an angry Aztec god that wants Selena’s power to himself. And they will discover in the impending final battle of the gods, no one can be trusted.Cities of the GodsAs Cameron and Selena learn more about their ancestry, they discover that by connecting to their pasts, they are already becoming more powerful, even without the aid of Lugh’s Spear or the Dagda’s Cauldron. But Cameron refuses to consider a future on the pantheon of the Tuatha Dé, and Selena cannot imagine a future without it.Meanwhile, their secret has been revealed to all, and it’s no longer just the New Pantheon they have to evade. The Norse, the oldest rivals of the Tuatha Dé, know the prophecy that ties Selena to the future of their enemies, and the easiest way to defeat them is by killing her. But the Otherworld remains the prized treasure for all of the gods, and one outcast in particular has set his sights on overthrowing the Irish alliance on the eve of Samhain.In the second book of The Unbreakable Sword series, Selena will be faced with the possibility of the Tuatha Dé losing the Otherworld and their magical island cities, as well as losing her friendship with Cameron as their desires for different futures threaten to tear them apart. And if Cameron refuses to join her on the Irish pantheon, whom can she really trust amongst the gods? Treasures of the GodsTime is running out for Cameron and Selena to find the Unbreakable Sword and Nuada’s heir before the Norse lead a devastating war against the Tuatha Dé for control of the Otherworld. But ever since Cameron took the Spear and became the next sun god, new threats keep emerging: one from a Persian god and one from Cameron himself.In their quest to find the Sword, Selena is confronted with the uncomfortable realization that Ukko might not be as evil as she’d always believed, but he’s clearly no ally either, so where does that leave the New Pantheon? And worse still, when presented with the truth about Alan’s deception, she discovers that some afflictions of the heart are far worse than just having it broken.In the third book of The Unbreakable Sword series, Cameron and Selena must find Nuada’s Sword if they are to combat the Norse in the upcoming Battle of the Gods. But if Cameron can’t learn how to be a god himself, none of the Treasures of the Gods will matter. Battle of the GodsCameron and Selena must find Nuada’s heir before the war begins, but Mithra and an Aztec god have complicated their mission. And finding the Tuatha Dé’s next ruler and combatting gods who want them dead aren’t the only problems facing the young couple; they also must find themselves. As those whisperings of familiarity grow stronger and Badb continues to insist she can’t interfere with their destinies, Cameron and Selena realize they are on their own to reclaim their lives.In the final book of The Unbreakable Sword Series, Cameron and Selena’s journey to protect the Otherworld will come to an end. But as they will learn, in their new world, nothing is ever as it seems and in the Battle of the Gods, old rivalries and new alliances will be tested.Journey with them now to the Otherworld. The Battle is about to begin.