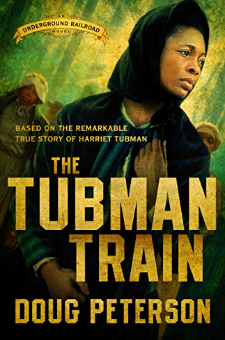 "I can't die but once!"This was the rallying cry of Harriet Tubman, the most famous conductor on the Underground Railroad. Her name is legendary, but many don’t know Harriet’s full story.The Tubman Train starts with her dramatic early years, including the pivotal day when she began having visions from God-visions of flying North. The story follows Harriet through her own escape in 1849 and the beginning of her work as the “She-Moses,” culminating in the dramatic attempt to rescue her brothers.The Tubman Train is the first novel to explore the complicated relationship between Harriet and her brothers, as she faced obstacle after obstacle in bringing them to freedom. It also explores the deep faith of Harriet Tubman and the excruciating decision that every slave faced-whether to put it all on the line to run North.Climb aboard The Tubman Train and hang on for an intense and memorable ride. “God’s time is always near. He gave me my strength, and HeSet the North Star in the heavens; He meant I should be free.”-Harriet Tubman