The Tools of the Ghost 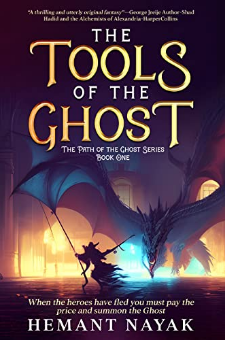 When fighting a MONSTER you need a BIGGER MONSTER on your side! Just make sure your own monster doesn't kill YOU first!

FBI agent Kiran Patel must hunt down a demon that kidnapped eleven children before it's too late.

Unfortunately, her partner and best friend was just killed by something out of a nightmare.

Before he dies, he tells Kiran there’s only one hope left to bring the kids home—she’s going to have to summon THE GHOST, a creature so disastrous that even the residents of Hell fear him.

But there are two rules she must never break.

Don’t promise the Ghost anything and don’t trust him for a second.

Heaven rejected him. Hell feared him. His crime was the only one that God could never forgive, but when evil is too powerful for anyone to confront, there’s only one solution left—to summon the Ghost.

One more thing- history’s two greatest heroes are coming along and Kiran is in charge of them all.

Now one unlikely FBI agent, a team of two heroes with tremendous egos, and a creature worse than the demons of Hell have got to defeat a demon before more kids disappear, or the GHOST does destroys them all.