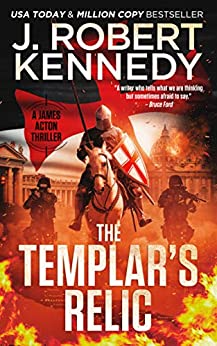 *** A USA TODAY Bestseller and #1 Bestselling Action Adventure novel on Amazon, Apple, Barnes & Noble, and Kobo! ***THE CHURCH HELPED DESTROY THE TEMPLARS.WILL A TWIST OF FATE LET THEM GET THEIR REVENGE 700 YEARS LATER?A construction accident leads to a stunning discovery—an ancient tomb containing four Templar Knights, long forgotten, on the grounds of the Vatican. Not knowing whom they can trust, the Vatican requests Archaeology Professors James Acton and Laura Palmer examine the find, but what they discover, a precious Islamic relic lost during the Crusades, triggers a series of events that shake the entire world, pitting the two greatest religions against each other.Join Acton and his friends, including the Delta Force's Bravo Team, as they race against time to defuse a global crisis that could quickly devolve into all-out war, the likes of which the world has never seen.At risk is nothing less than the Vatican itself, and the rock upon which it was built.From USA TODAY and million copy bestselling author J. Robert Kennedy comes The Templar's Relic, another entry in the smash hit James Acton Thrillers series, where once again Kennedy takes history and twists it to his own ends, resulting in a heart pounding thrill-ride filled with action, suspense, humor, and heartbreak. If you enjoy fast-paced adventures in the style of Dan Brown, Clive Cussler, and James Rollins, then you’ll love this action-packed archaeological thriller. Get The Templar's Relic today, and discover how an ancient relic protected by one Templar could ultimately destroy the Roman Catholic Church!About the James Acton Thrillers:????? "James Acton: A little bit of Jack Bauer and Indiana Jones!"Though this book is part of the James Acton Thrillers series, it is written as a standalone novel and can be enjoyed without having read any other installments.????? “Non-stop action that is impossible to put down.”The James Acton Thrillers series and its spin-offs, the Special Agent Dylan Kane Thrillers and the Delta Force Unleashed Thrillers, have sold over one million copies. If you love non-stop action and intrigue with a healthy dose of humor, try James Acton today!????? “A great blend of history and current headlines.”