The Sword of Kaigen 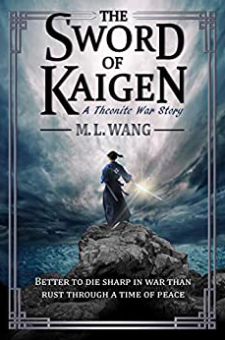 "Fantasy and martial arts aficionados alike should enjoy this emotionally supercharged novel about love and loss, which pierces readers' hearts with the precision of a samurai's razor-sharp blade." - Blue Ink ? Starred Review"The Poppy War's darkness meets The Last Airbender's Elemental Magic... I haven't been so emotionally moved by a book in a long while." - JC Kang, USA Today Bestselling Author of The Dragon Songs Saga On a mountainside at the edge of the Kaigenese Empire live the most powerful warriors in the world, superhumans capable of raising the sea and wielding blades of ice. For hundreds of years, the fighters of the Kusanagi Peninsula have held the Empire's enemies at bay, earning their frozen spit of land the name 'The Sword of Kaigen.'Born into Kusanagi's legendary Matsuda family, fourteen-year-old Mamoru has always known his purpose: to master his family's fighting techniques and defend his homeland. But when an outsider arrives and pulls back the curtain on Kaigen's alleged age of peace, Mamoru realizes that he might not have much time to become the fighter he was bred to be. Worse, the empire he was bred to defend may stand on a foundation of lies.Misaki told herself that she left the passions of her youth behind when she married into the Matsuda house. Determined to be a good housewife and mother, she hid away her sword, along with everything from her days as a fighter in a faraway country. But with her growing son asking questions about the outside world, the threat of an impending invasion looming across the sea, and her frigid husband grating on her nerves, Misaki finds the fighter in her clawing its way back to the surface. When the winds of war reach their peninsula, will the Matsuda family have the strength to defend their empire? Or will they tear each other apart before the true enemies even reach their shores? A rich elemental magic system and deep world-building make this martial fantasy perfect for fans of R.F. Kuang, Brandon Sanderson, Leigh Bardugo, and Lian Hearn.............................................More praise for The Sword of Kaigen"Complex societies and an unique magic system make The Sword of Kaigen an engaging work of high fantasy... compelling and rife with magic and heartbreak." - Foreword Clarion Review"This companion novel to a YA series tells the story of a mother and son caught up in a shadow war... Wang's (Theonite: Orbit, 2017, etc.) novel mixes sci-fi technology with the martial arts lore of East Asia to create a fantasy realm that is intricate and original." - Kirkus Review"Tonally reminiscent of Lian Hearn's bestselling Tales of the Otori saga... The Sword of Kaigen is an utterly readable novel and the perfect starting point for Wang's Theonite saga." - Blue Ink (starred review)"The Sword of Kaigen is an excellent Japanese-inspired military fantasy in all its glory... Wang knows how to write catastrophic elemental magic and implement extraordinary heart-hammering scenes very effectively. If you love The Poppy War, shonen anime/manga, or elemental magic battles--Avatar: The Last Airbender for example--you seriously have to read this book. Ice magic, wind magic, blood manipulation, and terrific duels... Honestly, sometimes it even felt like I was reading Brandon Sanderson's magical battles and that's pretty much one of the biggest praises I can ever give to any high fantasy author." - Petrik Leo, Novel Notions .................................................BOOKS by M. L. WANGTheonite Book I: Planet AdynTheonite Book II: OrbitTheonite Book III: City of Ghosts - Coming 2019!The Sword of Kaigen (A Theonite War Story)